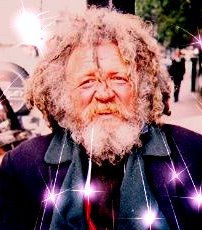 The same three years
they give urban foxes.

I had a choice of two religions

I think both my parents enjoyed my Methodist leanings; as they could sleep late on a Sunday and wave us goodbye as we crinkled in our crinoline dresses to church.

Later, when both my parents were dead I started to figure it out. I felt that I was probably a Jew, because I had an aunt named Miriam and an Uncle named Louie and another rich aunt and uncle who lived in a very nice bungalow in Miami.  I remember my father’s mother was always complaining and we all started to look Jewish the older we got.

Furthermore, I never bought anything at retail prices and always looked for bargains.

I am known to walk into a restaurant, feel the ambience, and walk out because I knew I could make the same thing at home, but cheaper. And my father used to say, when I admired a passing brand new car that wasn’t at least 5 years old, “But is it paid for?” His was, but it was an old Pontiac.

Our  tree this year is only half decorated and I call it my Jewish Christmas Tree.  I have subconsciously only decorated half of it; I guess so that the neighbours can get a feel for Christmas from the outside, since they can only see the tree above the window sill.  I consider myself now a  minimalist Jew

Mrs Monk and I came upon this man of the street who had utilised a City Of Westminster Trash Can, and was happy to pose for this picture.

When we apprached him I recall he was polite, upbeat and respectful.

This week before Christmas 2017 we have been told that rough sleepers do not survive more than three years on the streets, the same number of years they give urban foxes.

These stories were first published before the "Smart Phone", when such stories were bigger and were read on PCs.

For PC users The Jewish Christmas Tree, circa 2006 appeared like this on these pages.

It is duly noted that the corporates have since won , and the spirit of the philanthropic gift of the Internet by  Tim Berners-Lee, has now been fucked up. If good ever came as a consequence of the pursuit of profit, it is only the further pursuit of profit, which we shall call greed, that has now made things so much worse.

Nevertheless the debate about the merit of the concept of the Jewish Christmas Tree is ongoing. Just google it.  Yawn