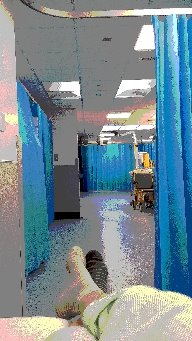 Red or White Wine?
"I have paid up my National Insurance in full,"

That much we now know, but a chest pain last night meant a visit to Southend A&E first thing this morning around 7 am.

In fact we discovered she had nothing more than a chest infection and no ailment we imagined might have happened in the night, albeit without actually saying anything out loud too each other. We did not need to.

A&E reception was surprisingly free of patients. One stern woman greeted us, her only customers. Behind her was a bold sign that instructed patients to notify a member of staff “immediately” if they had chest pains. Mrs Monk began to declare her pain, but the receptionist interrupted her and then got short with her.

"Do you want me to register you?"

Name and address were written down by the receptionist and a full description of her chest pain had to wait.

We joined the only other patient in the waiting room, a limping man.

The wait was about 5 minutes. So far so good for Jeremy Hunt’s A&E NHS Waiting Room Stats.

From that point all medical staff we met were foreign born, but for the chatty porters and the cleaners and the mean receptionist who were all British.

A Filipino nurse was kind and considerate and was the first to take Mrs Monk's blood pressure which was out of sight. She asked Mrs Monk to describe the pain on a scale of one to ten. The same question would be repeated every fifteen minutes for the next 4 hours.

This nurse then escorted us into the heart of the A&E and Mrs Monk was handed over to nurse David, a kind Indian man. It was David's task to hook up Mrs Monk to a bleeping monitor and to attend to her other needs while she was laid out in a curtained cubicle.

A Nigerian doctor appeared and she in turn decided on a series of tests that would keep us busy for around 4 hours.
A chest X-ray followed, carried out by a cheerful radiologist of African descent.

Blood tests by unseen phlebotomists, ECG et al.
The satisfactory outcome, was a course of antibiotics and not at all what we feared.

Each step of the way Mrs Monk was scared to death but also guarded about the accusation that she might have somehow misused the A&E. For some reason she felt obliged to justify herself to all these skilled medical immigrants.

"I have paid up my National Insurance in full," she would explain as if they gave a damn.

She laid there all the while on her back in an NHS gown, her feet adorned by odd socks which hung over the end of the trolley. She did not fail to make each person she met, laugh out loud.

Just the one exception at the reception, as duly noted.
I noticed that the beeping monitors beeped louder when she became agitated by awkward questions re alcohol consumption last evening.  This would be an inadvertent lie detector test. When she was asked if we had red or white wine, she looked at me to answer on her behalf, beep beep beep,  because she could not bring herself to admit to having both.

If only David Cameron and Jeremy Hunt had agreed to be hooked up to an ECG when questioned during the election campaign.

What a chorus of beeps that would have been?

Red or White Wine?
"I have paid up my National Insurance in full,"