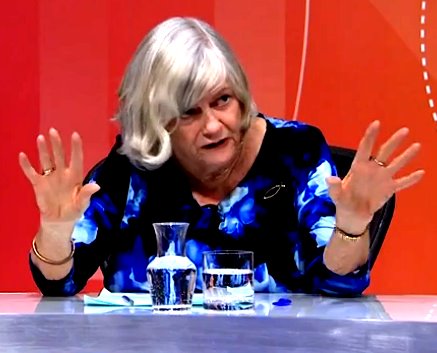 Why Does the BBC Accomodate The Institute of Economic Affairs?

Why did Theresa May take the NHS to the brink?

The NHS is bleeding

#too little too late

The allegation is that Tory DNA obliges May to undermine public services in order to justify the asset stripping of, and the privatisation of, the NHS.

As a consequence lives were lost and now May has made the bizarre uncosted pledge of a £20B for the NHS, a promise they expect the country to believe they will keep.

Had they told the truth during the General Election, the Tories would not now be in government.

As per Knee Replacements on the NHS,

to be kneedy is to be in need of a knee

and if a knee is "gone" that knee is fucked.

If to ask for a Knee is to be somewhat kneedy
Then to ask for two is to be too far too greedy.

If all cat knees are "gone" then a cat is more kneedy,

Centipedes should not apply for knee replacements

Who Needs Another Expert

What was Jeremy Hunt's Plan

for The NHS winter Crisis?

So we now know that Jeremy Hunt had a plan to deal with the predicted and predictable NHS winter crisis.

The plan was that patients in dire pain requiring and promised treatment would have that treatment delayed or deferred. Such patients with planned pain relieving hip and knee surgery would be required to endure more pain.

That was the Plan and Jeremy Hunt has been "planning" this strategy all year according to his current belated "apology".

Why did Jeremy Hunt not published

such a harsh plan?

This weeks "apology" sought to mitigate the third world UK healthcare provision on which Jeremy Hunt presides with the excuse that, "It takes 7 years to train a Doctor".

Why was this required training of

Doctors not put into place

It's almost as if the Tories are deliberately undermining the NHS.

What has Jeremy Hunt got to hide?

David Dimbleby claimed authority on the issue of NHS spending this last week on BBC Question Time, and also asserted that each side of the debate were misleading the public on this subject. You might think that this would reassure BBC viewers that Dimbleby and the BBC were therefore unbiassed and politically evenhanded.

However, David Dimbleby then demonstrated and accommodated the Tory agenda. He explained or rather demonstrated that public spending on the NHS was way out of control and did so by gesturing with a raised arm stretching upwards like a human graph confirming without reasonable doubt the assertion that we can afford no more spending on healthcare.

This gesture was in support of the only argument put forward by the Tories on the panel, Conservative MP Claire Perry, and the over excited platitudinous conservative Ann Widdecombe. Both of them emphasised the magnitude of the ever increasing NHS budget as if it were enough simply to complain without the consequent obligation to offer a proposal or even a hint of what might be done about the current NHS crisis. Neither dared say out loud that the NHS should be privatised but neither did they deny such a proposition or offer any alternative. Nor did David Dimbleby ask them to explain what they meant.

That did not stop Ann Widdecombe overdoing the "Hear-Hearing" at every meaningless platitude uttered.

The only argument made by the “left and more left of centre” members of the panel, Labour MP Owen Smith, and Billy Bragg, was that the NHS is underfunded by comparison with greater per capita spending in France and Germany. Nobody actually mentioned health spending in the USA which is of course double the current UK per capita spending on healthcare.

So, David Dimbleby, what part of this did you miss when you prepared for last Thursday’s Question Time? What part of this “left of centre” view is untrue or unconvincing and therefore misleading the British public? Where is the case for the claim that the NHS is adequately funded in 2017? What fool has ever said that other than Jeremy Hunt? David Dimbleby, do you agree with Jeremy Hunt and if so, where is the evidence to the contrary that you say you have seen?

The NHS is underfunded by comparison with other healthcare systems and also by the bleeding obvious; I refer to the actual real life and death crisis in most, if not all hospitals in every part of the country.

I pity Ann Widdecombe for she is addled with Tory DNA and there is no cure for such an affliction.